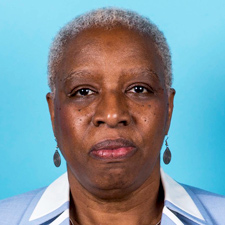 Jacqueline P. Blackett joined the staff at Columbia University in 1989 and became an Athletics Administrator in 1993, after four years as the head coach of Columbia’s women’s track and field and cross country programs. A member of the senior management team of the Department for 25 years, Blackett has worked closely with the past three Athletics Directors on the strategic management and overall success of over 5,000 student-athletes.

Blackett served as the Department’s Associate Athletics Director for Compliance and Student-Athlete Services from 1993 to 2010 and was responsible for compliance and Student-Athlete Well-Being, while acting as the Department’s liaison to a variety of offices on campus. In July 2009, Blackett was recognized for her outstanding efforts on behalf of Columbia’s student-athletes when she was named the Jostens Administrator of the Year in the Football Championship Subdivision (FCS) by the National Association of Collegiate Women Athletic Administrators (NACWAA).

Currently a member of the NCAA Division I Committee on Academics (COA), Blackett serves on the Penalty and Appeals sub-committee and represents the COA on the Division I Council’s Legislative Committee. Blackett also holds membership in Women’s Leadership in College Sports.

Prior to joining the Columbia University staff, Blackett served as the Head Cross Country/Track & Field Coach at the University of Rochester where she led the Yellowjackets to their best ever NCAA finish as a runner-up at the 1989 championships. Seven of the eight members of the Rochester Hall of Fame competed under Blackett’s leadership.

A Barbados native who grew up in Brooklyn, Blackett was an outstanding athlete at the University of Rochester, where she earned a Bachelor of Arts degree in psychology in 1981.